Our current nation is not the first place I lived in a slum.

When God led me to live and work among the poor overseas, I decided it would be good to get some experience first. Believe it or not, I found there was a summer internship for people who wanted to learn about living and serving in an urban slum. Some fellow interns and I moved into a slum for five weeks, and a couple who had already been living there for years helped integrate us into the community and introduced us to the people who had made their lives there.

I may write more about the internship later. Now I just want to talk about demolition.

In the slum I moved into there was a thick white line painted across the ground. This line was the point up to which everything would be destroyed. If you were in front of the line, you were going to lose everything in a few months. If you were behind the line you were safe for now.

The national government had been engaging in a long sequence of slum demolition which made it clear that their threats were not idle. One day I took the train through the city to see the progress of the demolition to date. Only a few kilometers away, the bulldozers had already done their work.

In some places people’s homes had just been demolished, and they were searching 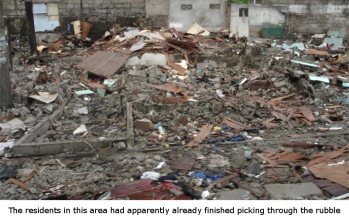 through the rubble for anything of value to recover. In other places the rubble sat alone, already picked through. And where demolition was months in the past, even the rubble had been swept clear, with only the faintest reminders on the ground to mark where families had lived and died for decades.

During the five weeks I spent living in this community, a community on the verge of demolition, I thought often about what would become of them. Would they find new homes or not? Would the government provide land, or would they have to fight for a scrap of leftovers somewhere in the city again? How much of their property would they lose in the move? And wherever they found land, would they find jobs?

But three years later, when the oft-delayed demolition finally occurred, I realized the greatest cost was in community.

When you destroy a physical place, it is impossible to transplant all the people and

their network of relationships somewhere else. Some people go here, others there. Some people might get government land on the outskirts, others will move next door, others will find a different spot in the city where jobs are available, others will return to the village. There was a strong local church in the demolition zone – it cannot exist in the same way, its congregation scattered, its servants scattered. The old community and much of what defined it is gone forever.

My lamentation does not preclude that good may come of such an event. Death always brings the possibility of new life. Where the church had done its job, had built strong, motivated people of God who cared about their community, the possibility existed for new seeds to be planted elsewhere. Perhaps the scattering could build five new strong communities from the ashes of one.

And perhaps other people who were not yet ready for such a new start would be scattered in the winds and lost to community altogether.

I’ve begun to feel that my time among the global poor could be marked by the constant drumbeat of demolitions. The defining experience of my first trip to Asia was observing a small-scale slum demolition. This first internship living in a slum had the specter of demolition hanging over it and demolished communities lined up nearby. When we made our trial visit to our new country, we stayed with a family that had been forced to relocate after their slum had been demolished. And in the city where we have lived for the last five years the parade of demolitions has been steady, up until the moment four months ago when we were told that our own slum was threatened with demolition, and the moment just last month when the small slum next to us became the first to go.

I don’t know what it means, this constant threat of demolition. But I see the families picking through the rubble of their lives, and I can’t imagine it is what God wants.

One thought on “Demolition”