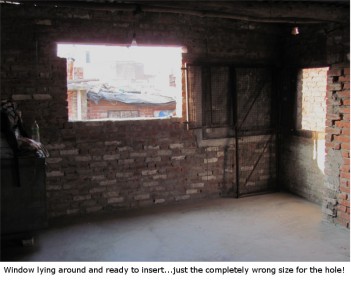 I am a poor language learner.1

This weakness has led to much discomfort and occasional hilarity.2 Our first year or two in the slum was especially trying.

Soon after we had planted ourselves in a new city (after the episode Peregrine wrote of here), our landlord Gulshan decided that we needed a real window.

The process of getting someone to insert a window into the hole in our room was confusing to me, and apparently also to Gulshan, because she kept referring to it as a “mystery.” I affirmed that it was a mystery to me as well. On the fifth day the bricklayer finally showed up, and I realized that such a craftsman is called a “mistri.”

I only became more confused after the mistri’s arrival. Peregrine, the better language learner in our family, was out for the evening and thus I was left to my own devices on communication. Gulshan kept asking me for my opinion on an aspect of the window, or so I thought, and I kept telling her in broken language, “it’s your house, so it’s your decision.” I was afraid to make any consequential calls on her new window as we were planning on moving out in a couple months to live with a poorer household in a smaller room. I was afraid of stating the wrong preference and making the room less appealing for the next residents.

Gulshan sighed and turned to ask her teenage son the same question, and he left. That’s when I realized that she wasn’t asking my opinion, she was asking me to help out by going to get the part the mistri needed to build the window. In that context my replies had likely conveyed, “it’s your house, so you do it.” I apologized profusely and tried to explain the misunderstanding, but probably failed to convince her.

About a month later, after another string of language issues, Gulshan declared, “You’re so stupid, you don’t understand anything at all, it’s useless.”

I’ve never wavered from the choice we made to live here. Still, even the little daily things about the choice can be tough sometimes.

[1] When I was a child I attended speech therapy for five years. It was a brutal, frustrating process as the corrections I was being told to make always sounded like they matched what I was already saying. In college I noted a complete inability to follow lectures for more than 5-7 minutes at a time, and figured I had some form of ADD. Several years after I moved into the slum I visited a counselor to deal with what I thought were attention issues. The counselor took my early speech problems, my language learning difficulties, my phobia of phone conversations, my errors in sounding out or spelling unfamiliar words, my inability to follow oral lectures/sermons of any length, and my felt need to escape from meetings and social situations in which others are talking extensively, and suggested that what I actually had was an auditory processing disorder. It is difficult for me to process any length of oral language unless I already have a decent idea of what the other person is going to say. Not being able to see their face makes it worse, accents make it worse, high talking speed or low talking volume make it worse. And it is borderline impossible for me to learn new vocabulary by hearing it, rather I have to read it and study it first before I will comprehend it audibly. This has made language learning very slow and difficult for me. On the other hand, a lifetime of developing coping mechanisms has led me to develop a wide range of strengths which I might not otherwise have had.

[2] You wouldn’t believe how many failed tries it took for me to consistently ask for a kilo of “squash” without inverting the vowels and asking for a kilo of “Lord God” instead.

One thought on “Struggles in the little things”