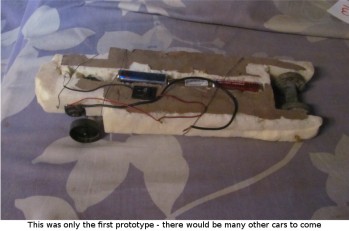 Hamza was in the middle of a crowd of boys outside of his door. They were watching something advance along the ground under its own power.

Hamza turned to look at me and said, “This is my car, I made it.”

I was impressed. The above photo shows his first working motorized car, made entirely from trash picked out of recycling shops and various dumps that line the slum.

The car struggled, but it could motor itself down our slum’s alleyway. I was a bright kid at his age, yet I never would have even thought of doing this. I wanted to know more. 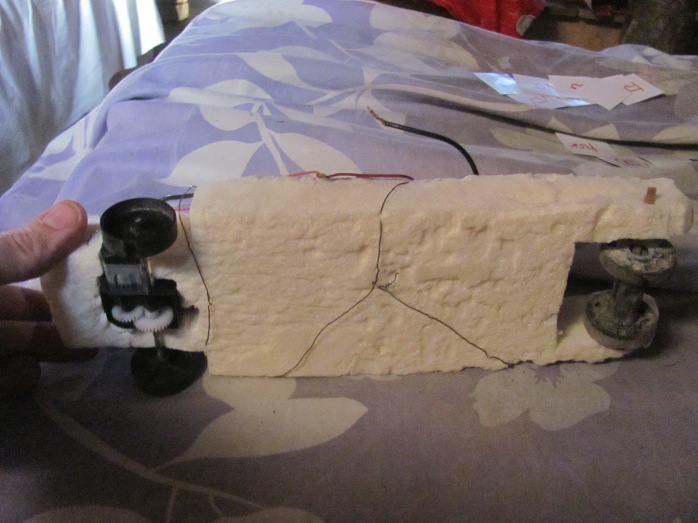 It turned out that Hamza had paid a junk dealer 20 cents to get a toy motor attached to an axle from a broken and discarded toy car. He proceeded to collect batteries, wires, a switch, a second set of makeshift wheels, and a styrofoam block that he could carve into a body, and then figured out how to put it all together in a way that made the car run. The endeavor stretched out several months from when he first bought that little motor, as he had to hunt down most of the parts without being able to afford an additional expenditure to pay for them.

Over the next few years Hamza repeatedly experiment with and improved upon his designs. The AA and AAA batteries gave way to discarded cell phone batteries for several models…and then in a frightening innovation, Hamza figured out a way to use a long wire to power the car directly from an electrical outlet. That car flew. The Styrofoam block body gave way to a wooden body and then other materials. The wheels evolved.

Hamza had a keen interest in making his own thing, and a lot of talent in making those things work. Such talented, self-motivated kids aren’t too common.

It sounds like a feel-good story. But there’s more to know.

On that day when I saw Hamza’s motorized car for the first time, I was aware that he was a child who couldn’t read.

Hamza’s family had been dysfunctional since before he was born. And the previous winter, his father died. For the most part the troubled man had already checked out of life years before that. Hamza had been his favorite.

That’s where Hamza’s life was at when he started building cars.

I worked to get Hamza to care about his literacy, and through the program his reading improved. Only 31 sessions after he started (though it took him six months to attend those 31 sessions), Hamza was literate and reading at a 3rd-grade level. Yet his interest in school and performance there only improved slightly.

Hamza’s mother remarried. The home situation remained difficult. At the age of twelve, Hamza began working as a child laborer, with his family’s rationalization that he was more interested in work than school. Later he stopped, for reasons that are unclear. A few months after that, Hamza and two friends ran away from home, managing in only a week to travel nearly 2,000 kilometers through two major cities before child welfare agents took them in and called their families to get them. They were supposedly going to look for work in the big city, but it’s difficult to know exactly what was on their minds.

Two more years have passed since then, and Hamza appears rudderless. I believe he still attends school on occasion, but it’s hard to imagine that he’ll have any chance of passing the 8th grade exams when they come next year, that moment when automatic class advancement ends and tests have to be passed or else. He still works on occasion. He is now a teenager, and expresses some of that dismissive teenage attitude towards life.

Yet Hamza was brilliant with those little cars. What can he do with that? Is his talent and his curiosity and his energy…his life… just going to slip away from him?

One thought on “Hidden talent”