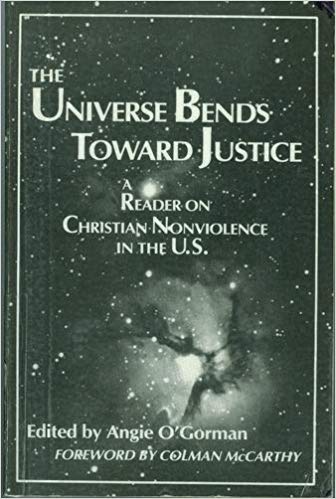 I want to share a story from the Catholic human rights advocate Angie O’Gorman. When I think of the surprising power of a nonviolent response to counter violence, this is the story that most often comes to mind. This woman’s experience really challenges me, especially as I find myself often in the place of fighting for women’s safety, and yet I still believe that only love and human connection will turn around the division of violence.

I was awakened late one night several years ago by a man kicking open the door to my bedroom. The house was empty. The phone was downstairs. He was somewhat verbally abusive as he walked over to my bed. As I lay there, feeling a fear and vulnerability I had never before experienced, several thoughts went through my head – all in the matter of seconds. The first was the uselessness of screaming. The second was the fallacy of thinking safety depends on having a gun hidden under my pillow. Somehow I could not imagine this man standing patiently while I reached under my pillow for my gun. The third thought, I believe, saved my life. I realized with a certain clarity that either he and I made it through this situation safely—together—or we would both be damaged. Our safety was connected…That thought disarmed me. It freed me from my own desire to lash out and at the same time from my own paralysis. It did not free me from feelings of fear but from fear’s control over my ability to respond. I found myself acting out of a concern for both our safety which caused me to react with a certain firmness but with surprisingly little hostility in my voice.

I asked him what time it was. He answered. That was a good sign. I commented that his watch and the clock on my night stand had different times. His said 2:30, mine said 2:45. I had just set mine. I hoped his watch wasn’t broken. When had he last set it? He answered. I answered. The time seemed endless. When the atmosphere began to calm a little I asked him how he had gotten in the house. He’d broken through the glass in the back door. I told him that presented me with a problem, as I did not have the money to buy new glass. He talked about some financial difficulties of his own. We talked until we were no longer strangers and I felt it was safe to ask him to leave. He didn’t want to; said he had no place to go. Knowing I did not have the physical power to force him out I told him firmly but respectfully, as equal to equal, I would give him a set of clean sheets but he would have to make his own bed downstairs. He went downstairs and I sat up in bed, wide awake and shaking for the rest of the night. The next morning we ate breakfast together and he left.

Several things happened that night. I allowed someone who I was afraid of to become human to me and as a result I reacted in a surprisingly human way to him. that caught him off guard. Apparently his scenario had not included a social visit and it took him a few minutes to regain his sense of balance. By that time the vibes were all wrong for violence. Whatever had been motivating him was sidetracked and he changed his mind.

Through the effects of prayer, meditation, training, and the experience of lesser kinds of assault, I had been able to allow what I call a context for conversion to emerge.

One thought on “Intruder in the bedroom”