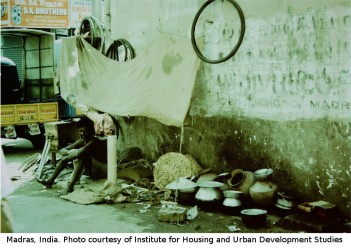 Soon after we came to the country, we encountered a man in our community who suffered from mental illness. He tended to sit half-dressed in the alley near our friends’ room. At times he shouted incoherently and made motions with his head. He appeared to be suffering.

One of my friends would sometimes sit next to him and try to talk. (This friend is a saint.) The man did not respond that I can remember, but the presence did seem to calm him. He couldn’t have been entirely neglected, as someone cut his hair on occasion, and somehow he obtained food.

Several months after we moved into the community there was a major festival. I was learning language very slowly and needed an excuse to go outside and mingle, so I went out looking for festival food.

While I was among the crowds I heard a commotion, then saw our mentally ill friend get up and run. A gang of children followed. My heart sank. From what I could discern, he had fled in response to children crowding around him and taunting him, and they weren’t about to let up.

I went after them to try to keep them away and give the man a little peace, but he managed to outrun them and the children dispersed. I went back and got some food.

About the time I finished eating I again heard a commotion. The man was now standing on top of a concrete divider in the middle of the street, screaming in agony. Children were following and taunting him, and some were throwing rocks. Older youth had also joined in on harassing the man and anger got the better of me.

I ran up and raised my voice. “What are you doing? Why?”

They stopped, looked confused, and tried to explain that the guy was crazy. In their minds that justified their behavior towards him.

“I know he is! So? Would God be happy with what you’re doing right now?”

I used every means I could to express my displeasure and encourage them to leave him alone, sometimes switching into English when my limited local vocabulary failed me. The youth explained that they didn’t speak English, to which I responded (in their language) that they still understood what I was getting at.

A couple of the youth went off and brought back a young man I’d never seen before. The new guy wore glasses and dressed nice, and apparently spoke a little English. He listened to the boys explain what they wanted to get across to me.

Having understood the situation, he turned to me, said, “They are illiterate fools,” and walked away.

His anticlimatic dismissal took the life out of the crowd, and they dispersed. The man who was at the center of it all wandered across the street and squatted, still appearing distressed.

I didn’t know what to do for our mentally ill friend. The mental health resources to help him don’t exist here (even in America the resources to help people like him hardly exist). Churches are few and far between in the area, and I don’t know that any of them work with people like him. The children who were taunting him didn’t know any better. I should have tried to spend more time with him, but I wasn’t sure if it would do much good. My limitations in the language made me fear that I wouldn’t be able to communicate my intentions appropriately.

Or I was just scared of being caught outside my comfort zone.

I feel for him, a lot. And I know that there are others like him. And they have to get by in a world where more people are willing to taunt what they don’t understand than are willing to stand by someone and show them love. I think of the demon-possessed people that Jesus encountered in chapter 5 of the book of Mark, and others who were ostracized from their communities for various physical, mental, and social reasons, and how Jesus repeatedly brought the healing that helped to reintegrate them into their community. And I wonder what it would look like for us to be able to do the same.

So they came over the sea to the land of the Gerasenes. When they got out of the boat, they were suddenly confronted by a man with an unclean spirit. He was emerging from a graveyard, which was where he lived. Nobody had been able to tie him up, not even with a chain; he had often been bound with shackles and chains, but he used to tear up the chains and snap the shackles. No one had the strength to tame him. On and on, night and day, he used to shout out in the graveyard and on the hillside, and slash himself with stones.